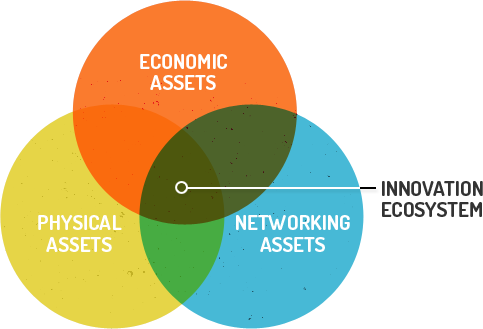 A cool Venn diagram, courtesy of the Brookings Institue

I’ve been promising a piece about innovation districts for several days on Twitter, but there’s a problem: though this is a fertile subject, I’m interested in it, and I have some things to say about it, the issue is that it isn’t really a good topic for a blog purporting to be about the Roanoke Valley. The whole reason I decided to start writing about the start-up culture that exists here is precisely because we are so different, yet I couldn’t find anyone talking about our deficits and our strengths as a self-sustaining start-up ecosystem. One of the key pieces to unlocking our potential is understanding how successes elsewhere could be replicated here, but also which experiments should be avoided.

So, as I’ve been doing my research, centered on Boston, I kept coming to the conclusion that I was really trying to shoehorn Roanoke into a conversation in which it had no real business.

Roanoke isn’t very much like Boston, to put it mildly. Still, it could make sense to replicate the innovation district concept on a population-adjusted scale (Boston’s innovation district is 1,000 acres) IF we had all of those ingredients listed in the Venn diagram above. We don’t; we lag behind significantly in capital investment, even on an adjusted per capita basis.

But it isn’t all gloom and doom. An innovation district is simply a dedicated space to encourage interactions between doers and financiers, and for such a small city we do pretty well at that. I’m thinking here of the growing number of conferences and events, put on by the likes of the RBTC and CoLab – or TechPad in Blacksburg – in order to put interesting people into the same room, just to see what happens. After all, start-up culture is supposedly the antithesis of staid, brick-and-mortar commerce; instead, it is a state of mind, thinking outside the box and trying new things. In that regard, we are building something kind of cool here in the Blue Ridge mountains, even without an innovation district.

We’ll see where it goes.