It looks even sadder in the rain…Or, why start-ups shouldn’t waste capital buying office furniture 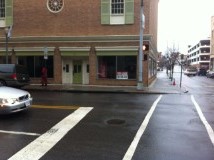 Do you know what you are looking at in this picture? Here’s another view:

And one more, just because I’m getting all fancy with pictures: 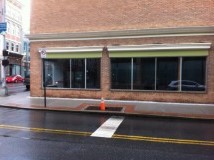 My friends, you are staring into an abyss of failure.

Well, I mean literally you are looking at a characterless brick building at the corner of First and Campbell, but it is figuratively the embodiment of an abyss of failure. In the past 36 months, this space went from being an art gallery, to vacant, to a coworking space, to the headquarters of a delivery service start-up, to vacant. That is boo-hoo sadsies.

I’ll admit I don’t know exactly what happened to any of those concerns, and maybe they were all a bunch of d-bags who deserved to fail, but I was personally bummed out when I realized the coworking place was gone, and then I was double bummed when the delivery place went under. (Not that it matters, but the delivery place was/is called Fetch, but I don’t remember what the coworking place was called. Might have been the Tear Factory, or maybe the Pit of Despair. Who knows. Oh!, and Fetch might still be in business, although obviously moved…their website looks updated and their twitter account is active.)

But let’s just take a moment to acknowledge some realities and maybe lay down a few ground rules.

First, no crying over spilled milk OR failed start-ups. That is just how this game works. Move fast, break stuff; sometimes, have your dreams crushed.

Second, we win together as an ecosystem, so NO JUDGMENTS. Let’s not let our pleasant little valley become like the cool girl’s junior high lunch table; in other words, we aren’t going to pile on and make failure worse, especially by Monday Morning Quarterbacking. Although…I mean, yes, that’s exactly what I’m about to do when I list the Rules in a second, but this is intended to be educational. Let’s all learn this lesson TOGETHER.

Okay, now some Rules. To start with, don’t open an inconvenient coworking space; if you aren’t near a walkable population center AND you have no parking, you can’t expect a start-up or telecommuter to pay to work in your space rather than in Starbucks, or their kitchen, for free. Second, if you want to be a hip coworking space, don’t plant yourself in an ugly building in a totally dead block. Third, become a 24-hour destination, which means keep the lights on. And finally, rent your furniture. Its a little more expensive long term if you get your venture off the ground, but hella cheaper if you fail in the first year.

One final bonus Rule for delivery services: you don’t need expensive downtown storefront real estate. You need a garage. But Fetch, if you read this, this Rule is actually for FUTURE delivery services, as I have a feeling your start-up grew out of the failure of the Pit of Despair, and so you probably assumed the remainder of their lease term. That’s my guess, and if true, I get it. Still, for next time, remember this phrase: efficient breach. Because you got to know when to hold ’em, and know when to fold ’em.